Outside of Skive – a small Danish town with 20,000 inhabitants – the GreenLab industrial park is trying to prove energy efficiency based on the concept of a circular economy. Launched two years ago, the site aims to create partnerships between companies, allowing them to share what they have and ultimately use other people’s waste as food.

The industrial processes at GreenLab are powered by renewable energy, including wind turbines with a capacity of 56 megawatts (MW) and a solar installation of 24 MW.

“The main goal is to attract new investments to the region. One of our goals is to show the world the benefits of our approach to the circular economy. We don’t just look at theoretical practices, but we also use them,” Skive’s. the mayor, Peder Christian Kirkegaard, told DW.

The mayor said GreenLab had found the right time, as the focus on climate change, and the ongoing power crisis, helped the Skive project make headlines. Even former US President Barack Obama recently came to town to talk about the green revolution.

Speaking to DW in the mayor’s office overlooking the Skive Fjord on the island of Jutland in Denmark, Birgitte Bahat, the municipality’s communications director, said proudly: “Skive is already on the map.”

Skive is a beautiful place with a long tradition of fishing and farming. But a severe budget crisis after the 2008 financial crisis led to a development crisis that left Skive struggling with its reputation. Since then, many young people have moved to another area, leaving the elderly behind.

In the streets of Skive, bicycles are less common than in other Danish towns. Some young people who work in local restaurants said they like Copenhagen and Aarhus – the biggest cities on the Jutland peninsula – because of the “diversity.”

When asked about the green transformation of Skive and the growth of communities, he does not know everything that is happening at GreenLab 11 kilometers (6.8 miles) away. “It sounds good, but it’s very complicated,” said a young woman working in a coffee shop.

The industrial park was supported by the local municipality, hoping that GreenLab could help solve Skive’s population and cultural problems. The project has already created about 100 jobs, said Mayor Kirkegaard, who seems to believe that the green revolution will attract young professionals.

“A lot of green development will happen outside of the big cities because we have the space.”

The municipality has already bought 55 hectares (136 acres) of land and invested 80 million Danish kroner (€10.8 million, $10.74 million) in the industrial park. The income they receive annually from rent payments from companies is in the region of 3 million kroner. As part of the expansion plan, Skive is considering buying an additional 70 hectares.

According to Kirkegaard, public cooperation is creating benefits that would otherwise be impossible. “When you start such a project, you will find many obstacles. Government agencies can help to solve the problem before it becomes a problem. For example, working with related laws.”

Dealing with problems with friends

In May 2021, the Danish Energy Agency granted the GreenLab industrial park a certified energy testing facility, allowing them to operate outside of existing regulations. With permission, the park can bring more renewable energy to the Internet as needed with the aim of gaining knowledge of the green transition, including the conservation of clean energy, green fuel, agriculture and industry.

As hydrogen is set to replace natural gas in production, GreenLab, for example, is expected to tackle the challenges of changing and re-engineering production processes. GreenLab offers support to companies in industrial parks to find gaps in their processes and address them with the help of researchers from Danish universities of technology.

“We are planning to start training activities within a year, which will serve Northern Europe in the field of PtX [Power to Gas] project expertise, as well as integration with district heating, and irrigation,” said GreenLab Chief Executive Christopher Sorensen.

Sorensen told DW that the current investors are Quantafuel and Equinor of Norway and German wind turbine manufacturer Siemens Gamesa, as well as local fishermen and farmers’ associations.

Meanwhile, GreenLab’s partner Eurowind is installing the final wind turbines, while installation of the solar farm will begin in September. The hydrogen plant is also being developed and will be commissioned in phases. The first 6 MW of hydrogen electrolyzer capacity is due to come on stream this year, with another 106 MW being added over the next two years. 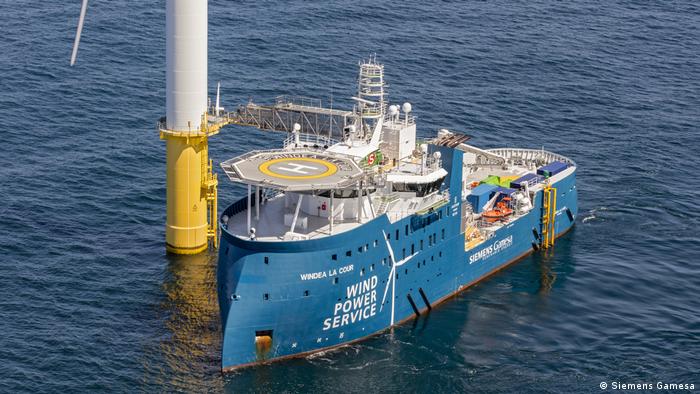 Solar and wind energy will play a major role in GreenLab, in which Germany’s Nokia is an investor

GreenLab is trying to combine business efforts with local green change initiatives. Biomass residues and residues from farms in the region, for example, are used to make jet fuel. Manure has been processed to be the feedstock for a biogas plant that will eventually produce electricity.

The sun and the wind will remain the main sources of energy that power the electrolyzers to produce green hydrogen. The air will be mixed with CO2 – produced by biogas – to produce bio-methanol. Finally, additional green hydrogen is planned for use in biogas production where it interacts with bacteria to promote output.

Also, a company in the industrial sector wants to extract protein from Denmark’s endemic starfish to replace the local farmers’ soybean meal. And Quantafuel, which is working to solve the world’s plastic waste problem, has set up a plant to convert waste plastic into new products, in partnership with customers such as BASF and Lego.

A former business consultant who moved from New York to Denmark more than two decades ago, Sorensen said corporate values ​​and long-term commitment are key. Wind turbines and large factories are often not attractive to the community, he added, but it is different when they are part of the idea of ​​creating new technologies, supporting green change and local growth. “This process can be repeated in the near future.”

The green of Denmark

GreenLab is part of a major carbon removal project in Denmark. According to the plan, the country’s largest power plant will replace coal with wood chips by 2023.

Denmark is also building a large artificial island off the coast of Jutland to house around 200 offshore wind turbines with a combined capacity of three gigawatts.

Another pilot project is being developed in Kalundborg, near the capital of Copenhagen, where a plant will use industrial waste as a new source of income.

Denmark’s renewable energy plans, including the construction of green energy storage facilities and urban-industrial symbiosis, are closely monitored by academic research to ensure that best practices are followed on a large scale. Tropical Is Political: Caribbean Art Under the Visitor Economy Regime