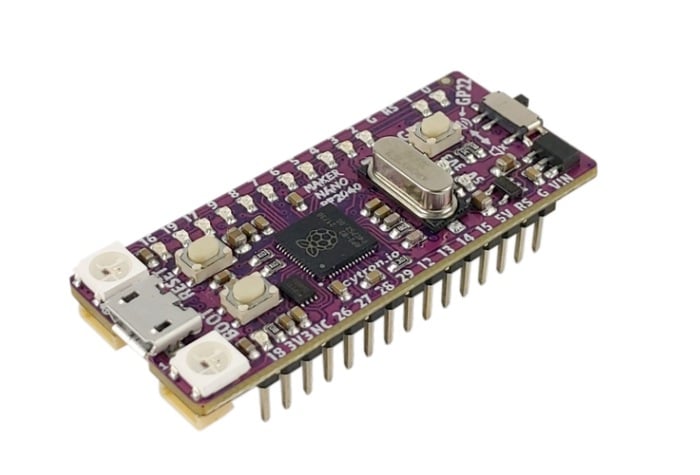 If you would like to know more about the new Arduino Maker Nano RP2040 you will be happy to know that a review has been published on the official website of Raspberry Pi MagPi magazine this week by Phil King. It can be bought for £8 or $8 depending on where you are The Nano RP2040 Maker, as the name suggests, features an Arduino Nano and is powered by a Raspberry Pi RP2040. Offering a Dual-core Arm Cortex-M0+ processor along with 264KB internal RAM, 2MB of Flash memory similar to the Raspberry Pi Pico.

“Slightly shorter than the Pico, the board has 30 pre-soldered pins, all neatly labeled on silicon. Although the pinout is very similar to the Arduino Nano’s, there are four (12-bit) analog inputs instead of eight (10-bit ). The other digital GPIO pins are numbered differently. The two reset pins are connected to the support button on the top, while there is also the start button – which is used to connect the board as a USB drive to the computer – and the reset button connected to GPIO pin 20.”

“On either side of the Micro-USB port there are two RGB NeoPixel LEDs. Since all of them are connected to GPIO 11, they cannot be controlled separately, but some nice color changing adjustments can be achieved. In addition, 14 digital pins have small LEDs Blue ‘ono which can be useful for dealing with circuit I/O. Basic sounds are also provided as a piezo buzzer which can be changed by switches. It can be programmed to beep when sending numbers.

“8/10 A well-designed microcontroller board with familiar Arduino features, the power of the RP2040, and a nice bonus feature.”

For a full review of the Arduino Nano RP2040 jump over to Raspberry Pi magazine’s website by following the link below. Organize your family with the digital family bulletin board